Happy belated 2015! In the new year, we’ve been reflecting about clients, their supporters and those whose mission focuses on healthy lifestyles. One of our best experiences was working with the Louisville Sports Commission and the National Senior Games. The National Senior Games is a sports competition held every two years for seniors from North America. With more than 10,000 competitors and 20,000 spectators, it the largest multi-sports event specifically devoted to adults ages 50 and older. 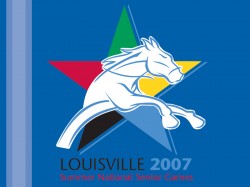 The Louisville Sports Commission was bidding on hosting the competition in 2007. To host an event of this size the entire community has to be a part of supporting it. So the Commission asked for a planning study to be completed. They wanted evidence that organizations, businesses and foundations in the city and region would support an event that would raise the awareness of healthy living.

The Sports Commission contracted with GF&M to conduct a campaign for the Games. With leadership from the Louisville Host Committee, we were successful in generating over $4 million in local and national support for the Louisville Games. In fact, GF&M’s role with the Senior Games extended beyond Louisville. We created a multi-year sponsorship for Humana and Astrazenaca both of which are still supporting the Senior Games today.