This week we are headed back to ’97. It’s the year Kentucky first hosted the Intel International Science and Engineering Fair. 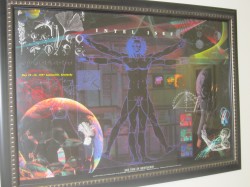 GF&M helped two Kentucky Governors and the Mayor of Louisville in bringing the world’s largest competition for high school students in math, science and engineering to Louisville not once but twice. I personally believe that this week long event helped strengthen the perception that Kentucky is a state of innovation and technology. At the time, some 1200 student competitors from 35 foreign countries came to Louisville. There were over 1000 judges and some 1500 volunteers. Now, the competition has well over 80 countries involved with many more judges and volunteers.

The Opening Ceremonies for the event were held at night on the Churchill Downs track. It was the first time Churchill had ever hosted an evening event and the first time the general public were allowed to walk on the same track used for horse racing at the Kentucky Derby. 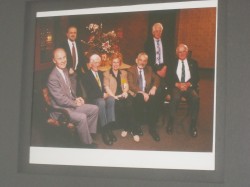 Susan Griffin with six Nobel Laureates who were invited to Kentucky as part of the Intel ISEF in 1997.

As a part of the Intel ISEF 1997, GF&M helped to invite six Nobel Laureates. They visited Jefferson County Public School classrooms to interact with middle and high school students. This marked the largest gathering of Nobels in the state of Kentucky and the first time Nobels were involved with secondary school students. What a first that was for the state of KY. I bet the guys from “The Big Bang Theory” can’t say they’ve met so many Nobels.

The 1997 Intel ISEF really held the bar high for future fairs. With the support of Kentucky’s Govenor, we increased the number of scholarships awarded to the student finalist. That had never been done before. The result provided Kentucky Higher Education with the opportunity of awarding ISEF finalist to come to Kentucky for their bachelors degree. Talk about injecting international award winning innovators directly into our higher education systems and ultimately our economy.

Because of GF&M’s leadership during the 1997 Intel ISEF the Host Committee for the 2001 Intel ISEF requested our services in support of their fair in San Jose, California.