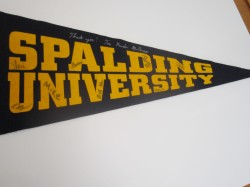 As graduation season comes to an end for secondary and post secondary schools in Kentucky, we thought we would take a look back at one of our education clients. JoAnn Rooney, then president of Spalding, invited GF&M to provide additional leadership for an endowment campaign. The campaign was to directly support the students through their scholarship fund. Since Susan Griffin is a proud graduate of the university and it’s one of the oldest educational institutions in the city of Louisville, we were thrilled to be a part of the effort. In a limited time frame, we were able to complete the goal of one million dollars and secured a matching grant from the Brown Foundation. The campaign was supported by fabulous community volunteers, like  Mac and Tori McClure and through their leadership the campaign was a complete success.

The campaign in 2008 was a great experience for GF&M and personally for Susan to be back on campus. It is always exciting to work with such dedicated educators like those at Spalding.

Since 2008 went so well, in April 2013 GF&M was again invited to facilitate a strategic planning retreat with the Advancement Team. Under the new leadership of president Tori McClure, we spent 2 days in closed door sessions reviewing and updating the goals for Spalding’s  future. The pennant pictured above was a thank you gift from the entire Advancement Team to Susan Griffin, who acted as the facilitator for the retreat. Each member of the team signed the pennant. Honored and flattered by the gift, she keeps that pennant in her office.