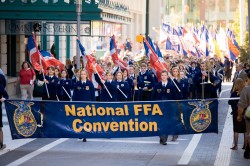 FFA students march into their annual National Convention in Louisville

As a firm, we are very proud of our headquartered city. As a native of Louisville, I have a personal belief that as a community member it is my duty to be an ambassador for the home team. Every new “transplant” I meet, I welcome them to Louisville and try to provide a few new cool things they should discover about the city and the state.

When GF&M partners with Louisville’s Convention and Visitors Bureau (CVB), we have that same opportunity, but on a whole new level!  Since 1992, GF&M has had the opportunity to partner with the CVB on many different projects like the Intel ISEF, the Lewis and Clark Bicentennial and the Vietnam Helicopter Pilots Associate to mention a few.  In the 1990’s, as FFA was just starting to think about moving the National Convention out of Kansas and possibly to Louisville, GF&M was tapped by the CVB to help develop a strategy for sharing this unique opportunity of bringing “65,000 blue coats” to Louisville with our corporate and civic business leaders. The question that needed a response was WHY Louisville would be interested in hosting an essentially Agri Business property of high school students.

GF&M understood the challenge and proposed a strategy that would showcase the value of one of FFA programs, the leadership training. The idea was to take FFA student leaders into  corporate and foundation offices, letting the students tell their stories of what FFA had done for them, and what they now, as student leaders, wanted to do for FFA and the future membership. This strategy gave Louisville leaders a first-hand experience with the quality of the student leaders. The meetings showcased the student’s ability to meet diverse leaders with a variety of interests and backgrounds, and to respond to their questions in a balanced and professional manner. The response of the business leadership was terrific!

These early meetings provided the basis for the development of future relationship with Louisville businesses and foundations. As the students shared their stories, which were  reinforced by convention attendees, Louisville’s respect for the work of FFA and the quality of the student participants was increased. From the early meetings, a host city committee was identified to streamline FFA’s request for the Convention including their need for volunteers, judges and funding. Today, Louisville is on a three year rotation cycle with Indianapolis. While the rotation offers challenges, it also provides the region with an opportunity to recruit these young students and future leaders back to our communities for college and jobs.

As stated in a recent Insider Louisville article, the FFA national convention comes to Louisville. That convention alone generates a $40Million economic impact for the city. We are thrilled to say that GF&M had a part in supporting that effort for the city of Louisville.